The Twelve Apostles Get a Ride in the Robot-powered Chariots!

Have we gone mad?  Possibly so!  It all started with the robot grant contest.  Mrs. Noble put it out there.  You voted for us many times, so did I, and we won!

They are the cutest little robots.  They almost look like possessed yo-yos when you first come into the room where they are in use.  They were rolling everywhere, and quite rapidly. Clear spheres, whose color you can change, traveling at quite a lick.  I tried them out, joining the 8th graders.  There was a spare so I got my own to run around.  It wasn’t as easy as it looked.  I learned to shuffle my feet as I walked around the room so I wouldn’t step on someone’s, or get tripped by one, as I tried to locate mine when it went MIA (Missing in Action).

You want to talk accessories, these things were made for accessories, we have nubby covers (for traction), chariots, ramps, and bridges.  Once they tie you in, they encourage you to accessory unto death.

As manipulating the robots was a little trickier than initially anticipated, Mrs. Noble got creative by necessity.  For the younger kids who asked EVERY class period if they could use them, she simplified the process and simply put a chariot on each Sphero, got out the iPads and away they went.  But wait, we have to give someone a ride.  What good is a chariot with no passenger?!  Lego people were the answer hands down.  I have never bought Lego people, neither had Mrs. Noble (she has a daughter who is/was not into Legos).  Most first timers in the Lego aisle are not over 35, but there she was.  Some stores sell Lego Minifigures, but are you kidding me, a mystery rider that is one inch tall is $4.  That is quite the piece of plastic!

Creativity engaged – she discovered you can get a Lego City package of ambulance drivers, police officers, firefighters and the like for $10 AND it includes four people! She purchased 3 different sets (which made for a total of 11 Lego people plus a shark) and was ready for the 2nd graders on Tuesday. With 10 pairs of students working in the room, we had barely enough Lego people for one to a chariot but Mrs. Noble notices one girl is gathering four Lego people for her chariot.  “Sorry, we don’t have enough Lego people for you to take so many,” she was told.

“You have to have friends,” was the response.  “You can’t go alone!”  Adolescence is still in the distance, but we have clear early indications it is on the way!

As she described the situation, I recalled…..hey someone here at school has a Last Supper Lego set.  That’s got to have twelve people, we could fill a lot of chariots there!  And someone gets to give Jesus a ride!

So there we have it, the twelve apostles will get chariot rides from the robots.  Makes perfect sense doesn’t it?  Sometimes I wonder what we are doing here, but isn’t it good when holy toys and even Legos can jump from religion to computer as part of daily life? Everybody needs a ride sometime, and who knows maybe Jesus will get out of the chariot and heal someone as he did in today’s gospel. 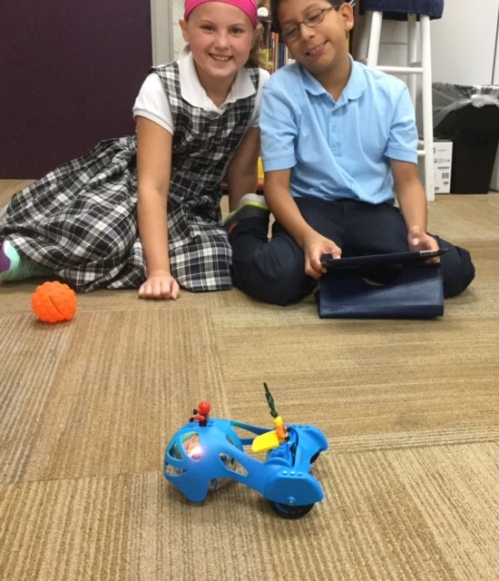 2 responses to “The Twelve Apostles Get a Ride in the Robot-powered Chariots!”